Most nature lovers can easily identify the Monarch butterfly, with its briliant orange color and dark lines.

The Viceroy butterfly (Limenitis archippus) is nearly identical to the Monarch. It has orange-brown wings with dark black veins. A black line across the hindwing distinguishes it from the Monarch.

The Queen butterfly (Danaus gilippus) is just slightly smaller than the Monarch. The Queen is an orange-brown color with white spots and black borders.

The Soldier butterfly (Danaus eresimus) is also slightly smaller than the Monarch. The Soldier is an orange-brown color with white spots and black borders. It also has darker veins than the similar Queen.

Looking at each individually and trying to make an identification can be tricky. On this page we include images of each individual species, as well as a side-by-side comparison chart of all four species.

Shown below is a spotting guide to butterflies that are similar in coloration and markings to the Monarch. Included are the Viceroy, Queen and Soldier ... the "Royal Court of Butterflies" !

Is It a Monarch or Queen Caterpillar ... or a Black Swallowtail?

The caterpillars of the Monarch, Queen, and Black Swallowtail all feature white, yellow and black markings. But which one are you seeing? Check the images below for the differences between the three caterpillars. Note that the Queen Butterfly caterpillar has three sets of fleshy filaments, one on each end, and one towards its middle. 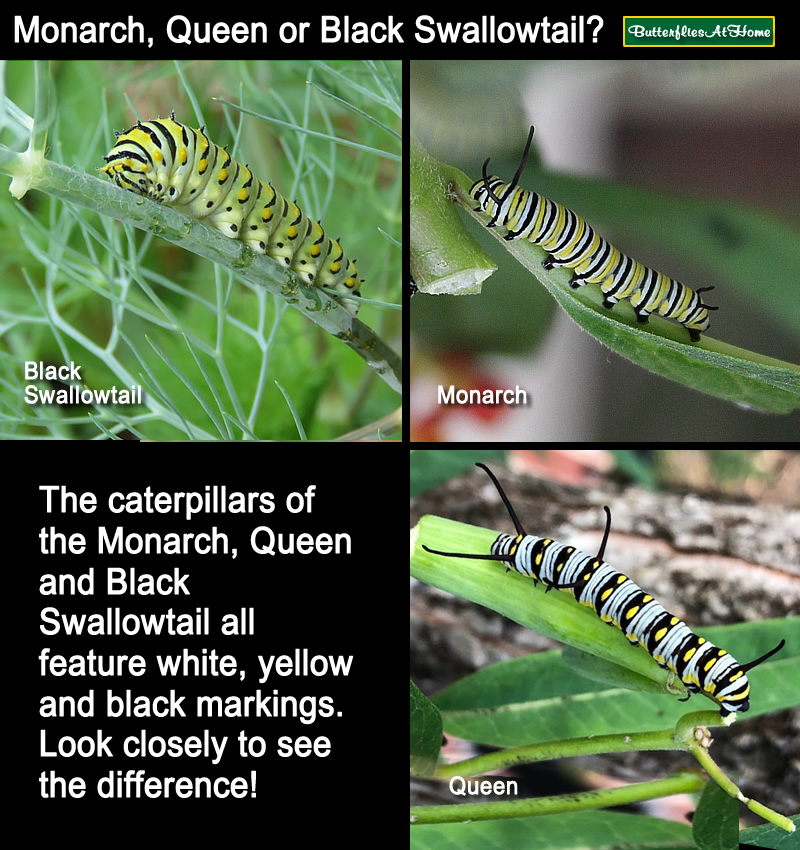